It has been a crazy year for the Canadian province of British Columbia. While two-thirds of the population live in the Greater Vancouver and southern Vancouver Island area, the other third live spread out across the vast expanse of land between the US border and the Yukon Territory.

The wildfire season, while a regular occurrence in this land, started early this year with record temperatures soaring high above the seasonal averages. Prolonged dry conditions have left thousands of hectares of land tinder dry. The new provincial government has extended the state of emergency for another two weeks, and at its peak so far there have been over forty-four thousand residents forced out of their homes on an evacuation order. While there have been some successes at battling these fires, the residents who have been allowed to return home still remain on evacuation alert, having to be ready to leave their homes in a mere thirty minutes.

Last year, the neighbouring province of Alberta saw over ninety-thousand people forced out of their homes due to wildfires there, and even amongst the conservative, oil-producing population the term “climate change” has become commonplace in our language.

“Be prepared for more extreme weather,” we are told, “These fires are to become the new norm.” 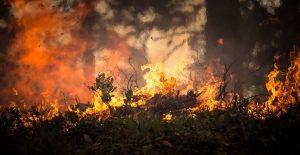 For those who are still stuck in the past, it is hard to square the circle of “global warming” after our intense winter, where Metro Vancouver saw the most intense winter in recent memory, with a thick blanket of ice covering the warmest city in Canada for months on end.

Now, however, as the provincial budget for fighting wildfires continues to soar by millions each day, the problem has become even more underlined. The armed forces have been dispatched to help with the disaster, and firefighters from Australia are flown in during their cool season to fight the fires alongside our own local responders. Many of the fires have been human caused – cigarettes, open fires and general human carelessness, but even the ‘natural’ causes such as lightning strikes are bolstered by what we know objectively to be human-caused climate change.

Our dependence on burning fossil fuels and eating unsustainable amounts of meat have left our planet on a warming trend, and each year our weather becomes more intense earlier in the season and for longer into the summer.

If it’s not on fire in the summer, it’s underwater in the spring or fall as glaciers melt at unprecedented rates, leaving nearby communities at incredible risk of flooding. As the swing from extreme summers to extreme winters becomes even more exaggerated, we are again met with the mantra of, “Get used to this, it is the new norm.”

And these are just the early warning signs.

While we are a prosperous nation, this reactive method of dealing with climate change is entirely unsustainable. However, as our internationally popular Prime Minister sends his condolences and throws our government into action, he is simultaneously fighting to make sure these disasters remain a problem for generations to come. Undoubtedly, Mr Trudeau is more popular amongst Canadians than his predecessor Stephen Harper, but his support is dwindling in the western province of British Columbia as he continues to fight for an expansion of the Albertan tar sands. While our previous Conservative government fought tooth and nail to slash environmental laws and get pipelines built, our new Liberal government has approved more fossil fuel projects in its short two years than the Conservative one did in ten.

And that’s not even the hardest part to swallow.

Worst of all, we are being sold all of this environmental destruction under the guise of “transitioning into a green economy.”

In order to save our land from the devastation of climate change, we must first build more pipelines!

Now, I can see how some people might arrive at this conclusion – our country is vast and sparsely populated, and historically we have a resource-based economy. We are undoubtedly dependent on oil, to an extent. However, as progress makes leaps and bounds in the renewable energy sector, we seem entirely transfixed on sucking every last drop of oil and gas from our land before we make any such type of transition.

In fact, not only are we hurrying to get even more of this black tar out of the ground faster than ever, we are doing so at the expense of our own local oil and gas companies!

That’s right, by forcing a pipeline expansion through the west coast, we are actually losing Canadian refinery jobs, as the product that would flow through this pipeline is not something we can process here in our existing refineries. Instead of developing world-class refineries and producing our own employment, we are cutting any chance at increasing our own economy by exporting the rawest materials possible to countries with little to no environmental standards.

Our iconic mountains are literally becoming obscured by smoke. Air quality forces any vulnerable residents to remain indoors. Thousands more are expected to have to evacuate in the coming weeks. Each year the arctic recedes a little bit more. If we could just burn a little more oil though, we might be able to save ourselves…